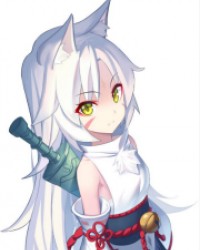 I'll Quit Being a God

The sky and the earth are infinitesimal as a grain, and a life of peace is like in the sea. Lu Heng, who has crossed over to the other world, finds himself transformed into a huge white wolf, a mountain God of a remote mountain with a group of villagers under his rule. In this strange and wild world, demons, evil and giant beasts are rampant, and humane order is almost non-existent. These, however, are not what Lu Heng needed to think about. What he is thinking about now is how to tell this group of villagers that he does not need little girls. Besides, he actually does not want to be this God anymore...

The thunder clouds were surging in the sky, so the old priest did not fly too high.

He and Qian merely flew at a height of several feet above the forest trees so as not to fly too high and be accidentally injured by the heavenly thunder.

However, their figures were obviously seen by the wolf God at the top of the mountain.