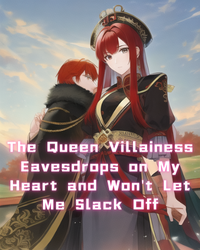 The first time Roger woke up, he transmigrated into an RPG Eastern Fantasy masterpiece called "Eternal Night”. He became the brother of the right minister under the ultimate villain “Eternal Night Queen”. He comes with an Acedia system, whereas long as he loafed around and lived as a waste, he can gain countless rewards. Unexpectedly, the Queen of Eternal Night does not live up to his expectations. Relying on her superb talent to eavesdrop on his heart:: "The Green Vines Empire has been around for thousands of generations, and Her Majesty the Empress is naturally the eternal master of the continent!" [Quit dreaming, you're scorned by the gods that joined forces to target you! In ten years, your people will be gone!] "I'm nothing but an amateur! I completely do not know how to make those chaotic people of the seventeen countries return to the empire!" [Your literacy rate is too low! Don't you even know the words, "Let the two wheels of all carriages be equally spaced, use the same words when writing letters or articles, teach by law, and set up officials in charge of education in all localities?"] "The left minister, Lord Margaret, is a world leader, I dare not impose any assumptions.." [She's an undercover agent who wishes you all died sooner] Three days later, the left minister Margaret was fired then the Queen of Eternal Night issued an edict: “For Roger’s credit of protecting the country, he will be promoted as the left minister.” "Thank you, Your Majesty..." [Don’t mess with me, I just want to loaf around!] Looking at Roger full of reluctance and can only agree, the Queen of Eternal Night reveals a smile of satisfaction. Tsundere… is the most interesting! Amazon link of all ebooks: https://amzn.to/3sxYXv4

Chapter 134 Rewarding You with a Cherry

It was approaching the end of work time, and Roger, who was fishing in the office and waiting to get off work, suddenly felt a slight heat in his thighs, and suddenly thought something bad.

Sure enough, he finally got a reply to the message he sent to the Queen of Eternal Night in the morning, inviting him to Fengling Moon Shadow Palace for dinner, and by the way, secretly discussing the disposal of the Tianming Army.