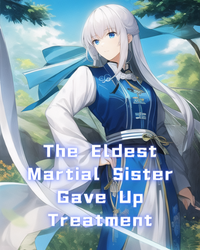 Bai Lian, the eldest martial sister of the Qiongming peak of the Duxian sect, is as pure as jade. and unparalleled in beauty. She is known as a Natural Saint and is sought after by thousands of people. One day, she suddenly remembered the memory of her previous life. This world was actually an r18 gal game called the Battle of the Gods. Her master, An Lan the reincarnated Immortal Heaven Lord; √ Her second martial sister, the future Holy Spirit Goddess; √ Her third younger martial sister, the rebirth of the Rebellious Shura; √ Her fourth younger martial sister, the future Dragon God of War; √ Her fifth martial sister, the future God of Martial Arts; √ And she, the eldest martial sister, was a [bitch] and [white lotus flower], who had a villain system and could become stronger by bullying her martial sisters, and had as many as 108 death endings in the original game! ┌(。 Д。) ┐ Bai Lian was speechless. [Every dog has its day, don't look down on me!] "I will be quitting cultivation!!!" Bai Lian gave up the struggle. …… Several years later, Bai Lian sighed: "Can you women with the protagonist models stay away from me!" "I am not a Natural Saint!" Amazon link of all ebooks: https://amzn.to/3SBGHLG

Chapter 20: For Years To Come, All the Nice Mornings and Charming Views Will Be Wasted on Me (1)

Bai Lian's plan to draw a family portrait was shelved right at the beginning.

Although she was a "Passionate" player before her transmigration—

Sleep all day and study for only ten minutes.

But this time, it wasn't because she was too lazy